Be It Resolved: Freedom of Speech Includes Freedom To Hate

This is the place for mature and civil discussions. Not for the faint of heart or weak in faith.
Post Reply
8 posts • Page 1 of 1

Be It Resolved: Freedom of Speech Includes Freedom To Hate

This speech from the Late Christopher Hitchens concerning a Canadian Hate Speech Law, circum 2006, is one of the finest discourses on Free Speech I have ever had to privilege of hearing. I'm sure I've shared this before, but I absolutely love it.

Note to the mods: I posted this here, but if you feel the Spiritual Matters/Debate forum is better, that's fine. I wasn't expecting anyone to argue his point on censorship, but there might be some objections to his claims on religion, and his whole speech is technically a part of a debate.
Pew Pew Pew. Science.

Not sure what to say. Other than look as people as individuals and not as groups. Yeah I'm Christian, I'm well aware of the good and the bad reputation is gets, some earned some not. I have not taken part in burning witches, harming abortion doctors, homosexuals, Jews, or people of other faith (or lack thereof). The don't judge motto goes both ways, just because I'm a Christian doesn't make me a nut job and if someone is a non-believer it does not make them evil. (Biblically we're all sinners and I'm no better)

Where do we draw the line on free speech? I think opinions have to be given when asked or expected. Forcing opinions and thoughts on unsuspecting people is a recipe for disaster no matter what you're peddling. I would imagine telemarketers would need some thick skin.

I know I do for my site. I think my url is pretty self explanatory yet many people take offense and post rude comments on the reviews. Are we hiding our intentions? I think not. Yet we do offer a unique spin on our reviews that many sites do not. Are our reviews hateful? I would hope not. There are game review sites for all sorts of niches. Even homosexual gaming. Yes it's not my thing, but I leave them alone and don't troll them I don't feel entitled to do so, even under the umbrella of free speech. I guess the Golden Rule would apply to the freedom of speech.
Is this site a blessing to you? Check out some free ways to support it!

I think he hits the nail on the head when it comes to the necessity of free speech. I especially liked the part where he points out that there's a law inhibiting free speech yet nobody can think of a person they'd trust to judge what's okay to hear and what isn't. I think it makes the point nicely.

CCGR, To your credit, you are very allowing of contrarian positions. You and just about everybody here is very welcoming to people like Bruce, TruthSeeker, and myself. And Orodrist. (All hail mighty Odin) And Sstavix and ArcticFox, I know a lot of Christians who would be very dismissive of Mormons.

I posted a video with some very scathing criticisms of religion, and you allow it.
Yeah, I think you're doing freedom of speech right. All you ask is that people be respectful of each other and not use obscene language. That's certainly not too much to ask for what you want to be a family friendly site.

I say this in relation to the context of your site. When it comes to Freedom of Speech, it needs to be completely open.

Bronan, I thought you'd like the points on free speech. I posted this mostly for this, and it's probably the most virile of religious critiques I've posted. I haven't put this up sooner because of it, but I think he makes important points. So.. maybe for another time.
Who knows. Maybe for now.
Pew Pew Pew. Science.

One thing that I've encountered in the past when discussing issues regarding free speech is that people feel like it's perfectly acceptable to privately censor people, because the First Amendment applies only to the Government/laws.

I really hate that argument. It's like saying you're willing to benefit from Free Speech in legal terms but you don't really believe in the principle of it.

Very few people really understand what free speech is. Even those who do understand it still struggle sometimes. It's hard, but it's also critical.

I find most of what Hitchens has to say to be revolting and narrow, but I'd never try to silence him.

Know what the biggest struggle is for me? That I respect other peoples' right to spew whatever they want, but that courtesy isn't always returned. It's one of my rage buttons. I don't think I'm alone on this.
"He who takes offense when no offense is intended is a fool, and he who takes offense when offense is intended is a greater fool."
—Brigham Young

You're not and I completely agree. Likewise, for all Hitchen's criticism of religion, he never calls for the silence of it.
I thought Hitchen's summation of Milton, Paine, and Mills was really good: Freedom of Speech is also the Freedom to Hear and when you cut yourself off from other's speech, you deprive yourself.
Pew Pew Pew. Science.

I agree with that. Funny thing is, I think a lot of people who want to silence others have exactly that motive... not only to keep other people from hearing the speaker's words, but to keep themselves from hearing it. People don't like to have their comfortable worldview threatened.

That said, free speech isn't a license to be a jerk. Too often people get that confused, and I think that inflames the argument because it can be used to justify censorship. It's a lot easier to be okay with silencing someone when that someone is being rude and insulting in the course of speaking their mind. Doesn't make censoring them okay, but it does make it harder to defend their right to speak.
"He who takes offense when no offense is intended is a fool, and he who takes offense when offense is intended is a greater fool."
—Brigham Young

Yeah, I feel the Dude puts it best:
Spoiler: 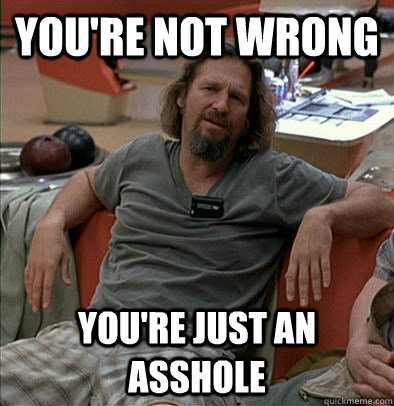 Some language in the spoiler tag
Pew Pew Pew. Science.

Users browsing this forum: No registered users and 0 guests