by ArcticFox
Since I can never have too many simultaneous projects going at once, I've also embarked on a project to build a fleet of Starfleet ships.

The kit is the AMT kit from the '80s which is an absolutely horrible kit. I didn't realize it until after I ordered it from eBay there's a much better (and larger) one out now that I will be purchasing when I go to do the Enterprise NCC-1701 post refit. For now, I'm making do with what I have.

The biggest problem with building a starship model like this is the studio model looks WAY different from the way it looks in the actual movie.

The difference is because of lighting. A studio model in a warehouse is lit very differently form that same model when it's being filmed to look like it's in the darkness of space. As far as I'm concerned, that's what the ship was meant to look like. The problem is, painting the hull a dark gray then trying to do a lighter gray where the ship's running lights hit the hull would look awful and not natural under normal lighting conditions in the room where I display it, and if I'm gonna display it in the dark I would be better off adding the lights for real.

So how to paint it? Are we going for accuracy to the model, or the "movie look?"

I decided to do neither. I'll just be painting it to match how it looks in my head, and take a little artistic license.

So first, I built the 4 main sections separately. The saucer, each of the two warm nacelles, and the secondary hull with the neck and pylons. I like a lot of detail, and if you look close at the Enterprise in any of the shows or movies, you see a lot of paneling where the metal looks like slightly different shades. I initially tried several different gray shades together, but it looked cluttered so I just went back to two shades of gray. Here's the port side warp pylon as viewed from above.

It's more subtle, but still gives the impression of separate panels.

by ArcticFox
Here's a couple of progress shots of the Enterprise-A.

The paint is mostly complete as are the decals on that side. I'm annoyed at the low quality of the decals, and I don't understand why the Starfleet arrowhead is orange, when it's a light gray on the actual ship. I guess I'll need to touch that up!

The blue windows are an arboretum, which is an odd place for it as the secondary hull is primarily for the warp core, shuttlebay and navigational deflector... but I guess you put it wherever it'll fit!

Here's a view of the navigational deflector. I wanted the fading effect to be a little more subtle, but I actually like how it turned out. Just wish it was a little cleaner.

In the original series, the navigational deflector was a brass colored dish that extended outside of the hull. In the redesign, it's inside the hull. Fun fact: If you watch the launch of the ship in the first movie, the deflector is an amber color, and doesn't change to blue until later. I suspect this had to do with limitations on the special effects, in the way the colors and blue screen worked. I don't know though. Would be interesting to find out!

by ccgr
coming along nicely, can't wait to see the finished product with all of your tweaks

I repainted the Starfleet arrowhead from that hideous orange to the correct light gray. Here's a closeup on the completed secondary hull.

The arrowhead was the emblem worn by only the crew of the Enterprise in Star Trek the original series. Beginning with the first movie, the arrowhead seems to be the symbol of Starfleet itself and is work by all Starfleet personnel.

In the unofficial tech manuals and books about the original series, each warp nacelle was a complete, self contained warp engine and they functioned best in pairs. In the first movie, the Enterprise had been redesigned so that there was a single warp core in the secondary hull which channeled warp plasma out to the nacelles, which generated the warp field. This is the basic approach used for all Federation starships from that point on.

And the inboard view.

by storm
I think the U.S.S. Enterprise it the coolest space ship ever made for a syfy movie or show. What are you making it out of?

by ArcticFox
This is the vintage amt/Ertl kit that isn't available retail anymore, but you can easily get it on eBay. I plan to do another later on using the newer, superior Northern Lights kit.

by ccgr
Any plans for an Ebon Hawk?

The problem is that the registry actually goes closer to the edge of the saucer. No big deal, right? Except that the decal curves too tightly... Locate it farther from the center of the disc and it looks wrong. So... I had to cut each letter out individually and place it. Not too bad... except that the decal letters are also smaller than they should be, so to place them in the same spots as the letters on the actual ship, the space between letters would look awkward.

So I decided to just put the letters on at a normal spacing. It means my ship's registry is physically shorter than it should be, but it looks natural, and so I'm satisfied. 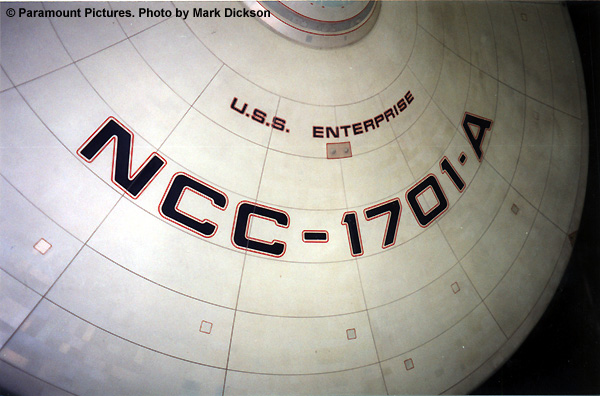 It's never been stated from any official source what "NCC" stands for. Some unofficial sources say it means "Numerical Constriction Contract." The 'A' was added to the end of the ship's registry in-universe in order to avoid naming the ship Enterprise II. By giving it a different registry, the original name could be re-used.

by ccgr
nice work and thanks again for the history lesson

by ArcticFox
One of the reasons I do scale modeling is that, along the way, you learn a bunch about the subject as you're doing your research. It's fun to share those tidbits

by Chozon1
If I remember correctly from my TNG lore, the arrow is actually related to Zephraim Cochranes original warp space theory.

That said, I missed both this and the Warbirds until yesterday. @_@ This is fantastic. Literally. Fantastic.

by ArcticFox
You are too kind, sir. Thanks!

I had never heard that about the arrowhead before. Maybe it came from a novel? I've read very few of those, although the ones I have read have been pretty good.

by Chozon1
Must have. Which is odd, considering I have the perfect image of Riker saying it in my head. O_o

by ArcticFox
Completed final assembly of the model last night. Gonna hit it with one more coat of clearcoat tonight then take a few pictures.

I have to say, the model kit is ABOMINABLE and I can see why it was eventually discontinued. I only marvel that it lasted so long. The decals are poor, the plastic is far too heavy and thick for the type of joints in the parts, the plastic resists model cement, the actual sculpt is inaccurate in several places, and even fails to align properly at some points. I was able to make modifications to overcome some of these problems, but for the amount of time and effort I was prepared to put into it I decided to just live with some of them. Even when some of the decals were correct, the instruction sheet wanted them in the wrong places on the model.

The worst part is the joint between the neck and the saucer. It is a weak joint and the weight of the saucer section is considerable. The base of the neck has a much stronger joining to the secondary hull and its' a mystery to me why they didn't do something similar at the top part. This makes joining the saucer to the neck VERY difficult if everything else has been assembled already. What I wound up doing was using the same model cement, but adding a few tacks of super glue to hold the joint together stiffly to give the model cement time to cure. Then I placed the whole model on a couple of pillows to support the saucer and secondary hull to minimize stress on that joint overnight. It seems to have worked.

If I ever find myself building one of these kits again, I will attach the neck to the saucer first, THEN attach that to the secondary hull last. That way the much stronger lower joint will be the final piece and should be much easier to assemble.

After her latest refit, the Enterprise has had a full shakedown in the Beta Trianguli proving grounds. We are returning to Starbase 16 for full evaluation and resupply before beginning our next mission. Enclosed are some images taken by the telemetry drones.